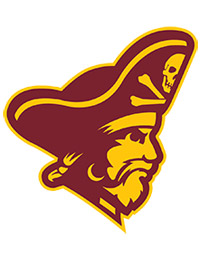 Armstrong State University athletics has had a rich history of success and has been an integral part of Savannah’s sports history. From the program’s earliest days competing as the Geechees to a 50-year history of competing as the Pirates, Armstrong has proudly represented the city in a multitude of sports. The standard bearer for the program is women’s tennis, which won an NCAA-record 10 DII national championships over the years. Overall, Armstrong State has won 13 NCAA Division II national championships, collected 107 Conference Championships, made 147 NCAA Championship appearances and featured 297 All-Americans. The Pirates have also been honored several times as the top overall athletic department in the Peach Belt Conference. The Pirates’ baseball team advanced to three NCAA Division II World Series (1988, 1989 and 1994); men's basketball has made eight NCAA Championships appearances; men's golf made the first national tournament for the Pirates in the 1960s and finished runner-up at the 2005 NCAA DII National Championships played in Savannah; fastpitch softball has advanced to the national semifinals twice and men's tennis has captured three NCAA DII National Championships (2008, 2009 and 2012). No history of Savannah sports would be complete without mentioning the many contribution on and off the field made by the Armstrong athletic department and its athletes, coaches and administrators.